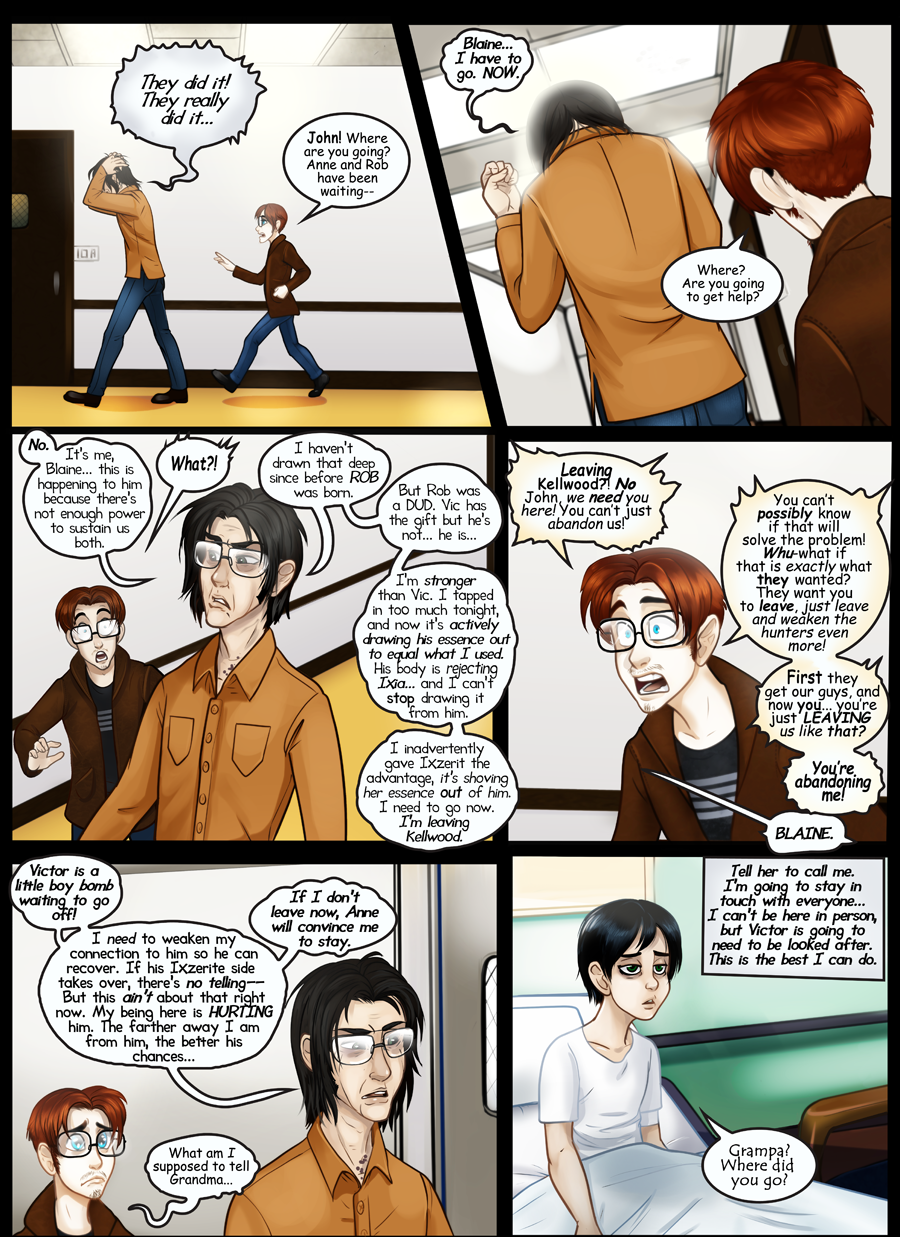 Typically an old man like John Marlowe would be kicking back and retired at this point while his kid takes over the monster hunting business. I think we've seen that Robert Marlowe doesn't have the temperament for that kind of thing, let alone magic powers. Vic on the other hand has something going on with him... both a family inheritance from John's side of the family, and whatever the heck is going on with his mother's side of the family.

Vic isn't going to drop dead if John stays, but if he loses all of his "Ixian" essence (it's signified by all the blue) then the Ixzerite essence will dominate him and he'll probably turn into someone like his Karen mother but with heretofore unknown magic powers.

Blaine sees this situation as being like if Superman just told his pal Jimmy Olsen that protecting Metropolis is up to him now, 'cuz he's gotta go into outerspace for a bit. Of course there's other superheroes here but he's not friends with any of them!

Okay so just to make sure I’m keeping track of things:

Ixia = good deity(?), symbolized by the color blue, and associated with hunters/Vic’s family in particular I think? (That, might be slight spoilers based on some of the later pages that are up on Tumblr and elsewhere, oops. Please pardon me if thats the case!)

Ixzerit = bad deity(?), symbolized by the color red, and associated with the Ash Circle and possibly some other bad guys (including “tree-f*ckers” but that might just be the same as the Ash Circle? That particular description concerns me given what’s discussed in those far later pages I mentioned, oh boy…)

It was a bit confusing at first since they both begin with “Ix”, but I think I got it now. Though I’m also assuming the similar names mean there’s a connection between the two. Two pieces of a once greater deity? Admittedly those later pages I mentioned, I don’t 100% remember them clearly, so maybe that will be explained once we catch up with that part.

Ooh, you pretty much got the gist of it! And don't worry I don't mind minor spoilers as there's a while til we get to that anyway, and I absolutely love when anyone wants to discuss!

You got it, Ixia is blue and she is associated with Hunters/Marlowes. I'll give a minor spoiler-hint too: doorways. If you notice the color of the portal John opened, it's blue!

Red (and sometimes white) are Ixzerit's colors, and indeed the Ash Circle operates in his interest. The Ash Circle were active in the 20's, the generation after them had a different name (and way of operating) while the ones that are in operation today are Ixzerites, and mostly they just seem to exist without any particular malice toward hunters, even though they've been keeping an eye on them waiting for the other shoe to drop (which is why they got so blindsided by the Ash Circle's comeback tour!)

Hehe, I totally don't recall where tree-lovin's mentioned, (Sounds like a fitting insult though!) but rest assured, no one got busy with any tree entities! XD (other than the old version of Battle Grandpa where John called the Ash Circle evil effers who worship a tree, perhaps I should've used "evil a-holes" to avoid an implication, haha!)

Oh, there's a connection, absolutely! He used to be named Iszerit. Ixzerit was a jealous fanboy who did a little identity theft and changed his name to reflect that. Well, and more than that but that's not anything that's been established in the comic yet, just in some supplementary patreon material (which is unlocked now, if you want some deep lore-part 1 , part 2 there was gonna be a part 3 but I lost a novel's worth of writing so I got too depressed to start over!)