#91 - Fragile Masculinity - in A Cabin In The Woods 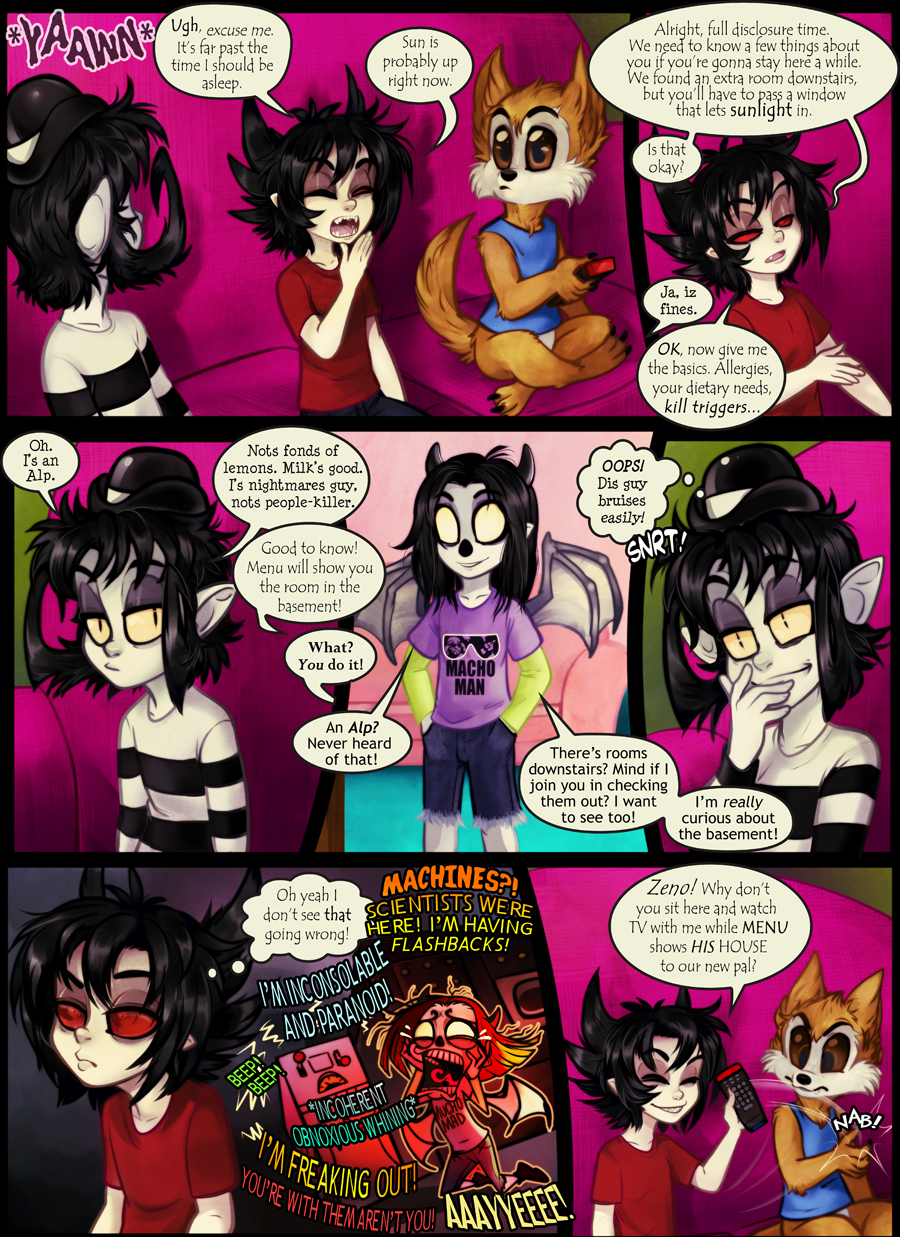 It should be "muy" and not "mucho", but Charby doesn't know that, and of course it doesn't work with "Macho".

But yeah he finally gets there! An Alp, one of my favorite mythological creatures. They're from German folklore, they are basically a type of elf that gives you nightmares while causing sleep paralysis (they sit on your chest and get heavier) but what makes them extra special is their magic hat, the Tarnkappe, which has all their magic in it-- conferring them with shape-shifting, invisibility, the ability to turn to mist, and looking darn spiffy. Also, no matter what they turn into, the hat is still there. That's why I love them, it's just so goofy. They also just love milk. Lemons are their garlic equivalent. The hat can be stolen and the Alp will pay a hell of a lot for getting it back... some say they grant a wish for its return, but sources weren't really forthcoming with how magical that wish-granting ability is (probably more of "do you a big favor".) Of course we'll learn more about his people as things progress, but I couldn't resist talking about Alps. I love 'em.

yesterday you made me wonder what exactly is the devil?
so I've found this types of satans in mythology:
*the lawyer who work under god and his job is to be the Prosecutor in the same court where god is the judge
*the angel of death who works under god and serves as an executioner
*god's and the prosecutor's informer
*the embodyment of evil inclination whose job it is to test the souls
*the embodyment of evil inclination which isn't with nor versus god but is versus us
*the chaotic god
*the evil god
*the fallen angel who led a rebellion vs. god
*the force of unknown who is true neutral
*a deity that sometimes assists the gods and sometimes behaves maliciously towards them
*in ancient hebrew of before the Babylonian exile, a synonym for enemy (including humans)
*the chief god of an opposing religion
*the angel of death who isn't with nor against god
*the punnisher of sinners who works under god
next comment will include some of the different descriptions of the devil

the devil sometimes described as:
*a goat
*a donkey
*a winged woman with goat head
*non corporeal and formless
*a pig
*giant humanoid with wings and control over fire
*a skeleton with a scythe and a black cape
*an armored humanoid (possibly skeleton) with a sword or butcher knife and control over the plague
*a red humanoid with two horns and pointy tail
*a giant fly
*evil spirit, king of dybbuks
*according to Saadia Gaon, a green flame with blue flame eyes and a sabre
*fallen angel
*bat winged humanoid which might be confused with modern vampires (while back then vampires were just a homanoid which was a werewolf, a werehyena, a wererat and a weredustcloud with the same weaknesses)
*a giant
*a shapeshifter
*a werehorse
*a man with giant p****
*a three headed, tailed, dark skin humanoid
*a Wolf with a Serpent's tail, vomiting out of his mouth flames of fire
*a tawny owl
*a serpent
*a constant storm
clearly, the devil is used as a term for the force who's against humanity, under, versus or unrelated to god, and used so often that there is no clear answer to what is a devil.
so for the sake of clearness, please, when you use the term demon, devil or satan, say which one do you mean.

Ah but I was clear I think? In this setting, a demon is something with fiendish essence that meets a certain threshold. Different comics have different ideas about what a demon is/can be, whether it's "pretty guy with horns" or "a tree", most people seem to understand demons as a sort of race/species or creatures which are usually but aren't necessarily always evil, or simply monstrous/misunderstood supernatural entities, as a lot of things we refer to as demons were once another religion's gods or spirits, and they need not be confined to Abrahamic concepts of what a demon is, either. Even in real life, mythology tends to label things "demon" if it's convenient. Sometimes it's a lazy catch-all, sometimes it's an active attempt to vilify opposing religious ideas.

Denizens of Kellwood are no different when it comes to labeling their neighbors, if you look like the guy who says he's a demon, you're probably a demon too. There's a lot of convergent evolution going on, so to speak. There's some creatures who even claim to be demons even though they're not, just for the clout.

Buuut, I didn't mention Satan so not sure why he's brought up here? Satan isn't in this comic-universe (only the concept as a religious/fictional entity). I used "a devil" rather than "THE Devil", and a devil is just the name used in-universe for a certain type of demons which have high amounts of fiendish essence but not enough to be true fiends. When Tony says "devil" he specifically means the sort of goofy, horned cartoon devil on a can of Underwood Deviled Ham. It's, in an annoying way, like if he called Charby a "Mini-Dracula".

IRL mythology, a "Devil" is a creature which commands demons, therefore Devil is a title like "commander" but also a type of creature the way an Archangel and an Ophanim are different types of creature in the "Heavenly Host" of Angels. Saying "The Devil" and meaning only Lucifer is like saying "The Archangel" without realizing there's like, more than one of 'em, and expecting it to be understood they meant Micheal specifically. In fact, the fly, horse and owl on your list are Beezlebub, Orobas and Stolas, respectively, from Dictionnaire Infernal/Ars Goetia, and they are actually individual Devils, not depictions of Satan himself. The serpent is just a retroactive theory of Genesis. Others sound to me like the usual case of people deciding an entity from another religion must be the same as their Big Bad, and retrofitting it into the mythology. This happens a LOT in folklore. It's why vampires are kind of a mess. But as a concept, Hell is just not a big part of my cosmology, but I have read up on it out of casual curiosity before in the course of mythology research.

There are many types of demon just as there are many types of fairy, and in fact many of these are almost indistinguishable in behavior and appearance but their purposes and origins and on a magic level, their essences, are very different. I guess it might be fair to say, demons in this comic's cosmology specifically, aren't an abstract personification of evil/temptation that they represent in Prime Universe/human religious texts, they are not here to judge or torment "sinners" or humans who don't worship whomever god they're loosely aligned with the proper way, and are certainly not from "Hell". Humans just aren't the big special thing that every cosmic being is trying to corrupt or save here, honestly, and there's many gods with their own creations out there that aren't humans.

No, you made yourself clear that demon is a polyphyletic term for an overall simillar things, you just made me wonder what exactly is a devil, and it's more of a rank or a title than a race. therefore, if you call something a devil, you need to be specific on which devil (I did not dive into christian theology like you did), for example, Ba'alzebul was indeed the main god of the Ekronian Philistines, so the ancient jews did the "big bad" thing, changed the name from zebul (ancient semitic for wealth) to zbub (hebrew for fly). about Orobas and Stolas, I wasn't talking about them, but mentioned the werehorse, and looking backwards, I don't remamber why is it there, and I mentioned the owl, as it was regarded as a force of evil and death in most of the levant until the greek arrived. (Others sound to me like the usual case of people deciding an entity from another religion must be the same as their Big Bad, and retrofitting it into the mythology) some of them are, some of them aren't.
[The serpent is just a retroactive theory of Genesis] not only, a serpent, just like the donkey, is also a case of people deciding an entity from another religion must be the same as their Big Bad, and retrofitting it into the mythology.
about the Archangel and an Ophanim, I don't know how it is in christianity, but in judaism, there are no archangels, there are some major angels but there is no information about them being an archangel (what exactly is an archangel?) and ophanim are a kind of angels that are mentioned only a tiny amount of times with no continuity of what they are ( wheels of a chariot, a rank of an angel, a kind of angel that is a burning wheel covered in eyes) let's stop here because I don't really care about angels and their really tiny role in judaism, or the massive role they got in christianity.
"Saying "The Devil" and meaning only Lucifer is like saying "The Archangel" without realizing there's like, more than one of 'em" about that, I'm a jew, and therefore when I say satan, I usually mean to the lawyer formless angel. and the fact that we don't agree on who or what is the devil just proves that there is need to be specific when saying a devil (which devil, you said yourself there were more than one)
about why I moved to Satan, it was because you made yourself clean about how you see demons, but you haven't done it yet with devils (and as you said, there is a difference between "a devil" and "the devil" [now, is there? it depends on religion])
also, before you answer me, I just want to say that your previous comment explained which kind of devil you meen [When Tony says "devil" he specifically means the sort of goofy, horned cartoon devil], my purpose was that I needed some kind of explanation on what you mean by devil, and I got it.

Alps? what are Alps? gotta research that.

wow. another vampire....and another thing...what if werewolves could have Insomnia?

it sucks, doesn't it?

Nope they are not vampires, they are elfs! Here's a visual guide I made, a compendium of information that's actually accurate to the mythology, has 8 years (at time of posting it back in 2008) of my research compiled into it. I scoured through books of mythology and bugged my German friends for information. Any source that calls them vampires didn't do their own research-- nearly everything after Bunson's "Vampire Encyclopedia" has shamelessly plagiarized his erroneous claim that it's a vampire ever since! (Even down to the phrasing!)
My inclusion of the Alp is expressly to show they are not vampires, because they are not well known people tend to make up things about them that are not accurate. Heh... sorry the Alp is my special interest, I've invested a LOT of time into researching them, hearing them called vampires always stings a bit! XD